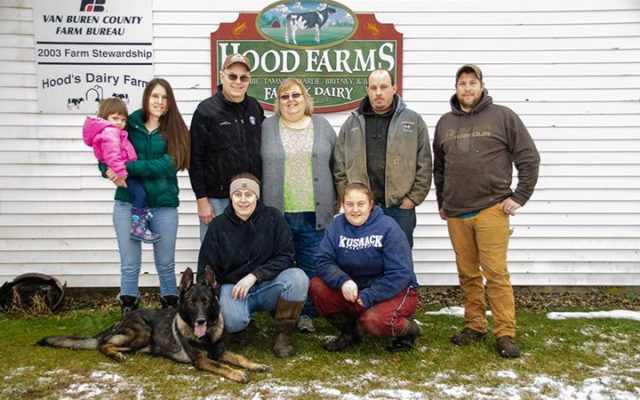 Back in 2000, Hood was already thinking of the future for his children. He expanded his dairy in Van Buren County from 50 cows to 300 cows, and now his herd has 500 cows.

“In the tie stall barn I was in, I didn’t want [my children] to have to do the same things I was doing because I was feeling it in my knees bending down and milking cows every day,” he said. “I wanted them to have a job, and I expended. It was something I was feeling—like a midlife crisis.”

That investment paid off. All four of his children and their families are still active in the farm, and Hood says that’s one of his proudest accomplishments.

“I always had friends that would say they’ve encouraged their children to seek off-farm work,” said Hood. “I was raised on a farm—I’ve been milking cows every day since I was 13-years-old. I realize it’s a great place to grow up and raise your family, and there’s a lot of benefits to that.”

Since his kids are actively involved, that’s freed Hood up to serve on many dairy industry leadership and promotional organizations such as the United Dairy Industry Association, Michigan Milk Producers Association, and the Michigan Farm Bureau Dairy Advisory Committee. He has also hosted a couple thousand people for two MSU Extension Breakfast on the Farm events. Hood says those events have been a great learning experience for the public.

“We have a lot of negative news that we get through the paper and TV,” he said. “Farming has changed over the years, and people remember their grandpa’s farm and stuff, and we want them to see modern farming techniques.”

His goal for the dairy industry this year is to educate dairy consumers about the product and where it comes from.

“A lot of this negativity comes from people not knowing our industry,” said Hood. “Sometimes science just isn’t enough, and they need to see for themselves.”

Hood wants to thank everyone who nominated him for the Dairy Farmer of the Year award, and says he takes a lot of pride in producing, what he calls, the greatest product in the world.