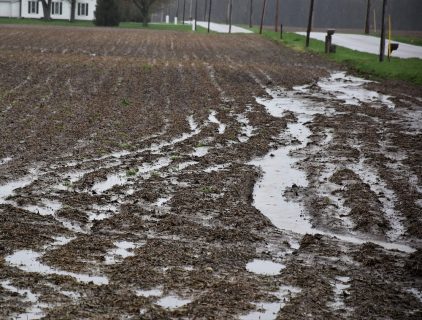 On Tuesday, USDA released its first crop progress report of 2020. Precipitation so far this month has totaled 2.85 inches, 1.13 inches above normal.

The average temperature for January is at 26.8 degrees, that’s 7.5 degrees above normal.

The wetter than normal, warmer than normal winter is both good and bad for livestock, fruit, and row crop producers. According to Ty Kalaus of USDA-NASS in Michigan, the lack of a hard freeze is hampering farmers’ abilities to get their remaining crops out of the field.

“It doesn’t allow a lot of harvesting at this point,” he said. “I would imagine most farmers are going to wait until spring to find out if they can get out and get those crops off.”

Some areas of the state saw upwards of six inches of snow from a winter storm on January 17 and 18. That snow was followed by rain, melting the snow and causing a concern for the state’s wheat growers. Several producers have reported ponding issues from the melted snow and rain, and ice sheeting in some fields that were planted late because of the wet conditions in the fall. Despite that, the condition of the winter wheat crop in Michigan is holding strong.

“As of the end of January, 1% of the crop was rated at very poor condition, 17% was poor condition, 42% was fair, 33% was in good condition, and 7% was excellent,” said Kalaus. “Those numbers hadn’t really shifted much from the assessment we took the end of December.

One year ago, a polar vortex made its way south to Michigan, bringing with it temperatures that were 25 degrees below zero with the windchill factored in. It caused irreversible damage to some of Michigan’s fruit trees. According to the report, this winter’s lack of sub-zero temperatures are a benefit to those trees, but it also gives more potential for pest and disease problems later this year.