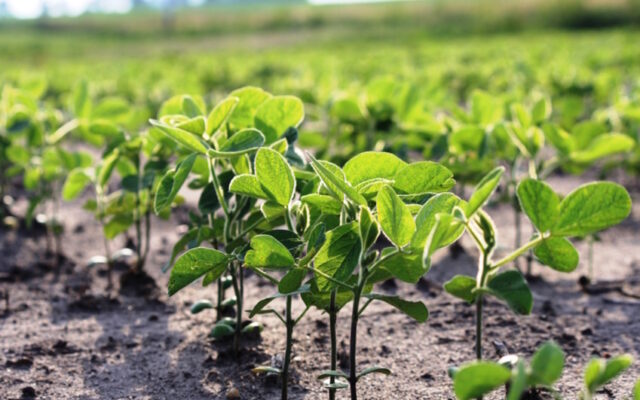 A three-year on-farm study funded by the Michigan Soybean Committee looked at the effects of soybean inoculant applied as a seed treatment and as a postemergence application.

High-yielding soybean has a high nitrogen (N) requirement (over 300 pounds per acre) throughout the growing season, most of which (60–70%) is typically supplied by symbiotic N2-fixing bacteria (rhizobium) living in nodules on soybean roots. Recent research by Moretti LG et al. (2018), “Can additional inoculations increase soybean nodulation and grain yield?” was conducted to test the hypothesis that additional inoculations of soybeans during the growing season will increase nodulation and available N to meet the higher N needs of high-yielding varieties.

This research, conducted under Brazilian climate conditions on clay soil (54% clay, 33% sand, 13% silt), found that both nodulation and soybean yield increased with postemergence applications of inoculant. To determine whether this study’s results are applicable for Michigan farmers, particularly those with coarse-textured soils, the main components of the research were replicated on farms in southwest Michigan in 2019-2021. See Table 1 for the locations and soil types of the fields used each year.

In 2019, soybean was planted on 15-inch or 30-inch row spacing in May on three fields—one of which was under center-pivot irrigation while the other two were dryland. Plots were 10 or 15 feet wide by 100 or 200 feet long. Treatments were replicated four times in each field.

Nine plants were dug up in each plot at V3 and R5 and nodules were counted. Leaves were also collected and analyzed for N concentration. Final stand counts were taken and a 5 feet wide strip was harvested from the middle of each plot with a small-plot combine.

No meaningful effects of inoculation on nodulation (number or mass of nodules), leaf N concentration or final grain yield could be detected statistically at either sample timing. Nodule counting proved to be challenging and very time-consuming, and it was determined that this was not an efficient or effective method of measuring the impact of inoculation treatments due to the inherent variability in nodule formation and the challenges in taking accurate counts.

Another challenge with this study was ensuring that the B. japonicum inoculant reached the root zone following post-emergence inoculations. Watering is essential to transport the inoculum downward toward the root zone, particularly during the hot weather typical of the V3 and R1 growth stages. For this reason, it was decided to only use irrigated sites for subsequent replications of the study.

In 2020 and 2021, the protocol for measuring impact on nodulation was changed to measuring the ureide concentration in the soybean stems as explained by Herridge and Peoples in “Ureide assay for measuring nitrogen fixation by nodulated soybean calibrated by 15N methods.” Ureides are chemicals produced from the N stored in nodules and subsequently transported to the aboveground soybean structures. The higher the ureide concentration in the stems, the more N is being produced in nodules. Collecting stem samples at R2 and R5 and analyzing for ureide concentration replaced the root digging and nodule counting performed in 2019. All other aspects of the procedure were kept the same for the second and third years.

A summary of soybean yield for each field is found in Figure 1. There was no statistically significant impact of inoculant treatment on yield at any site-year. The ureide analyses are still underway so no data are yet available on the impact on nodulation.

The lack of significant differences in yield is likely due to the presence of B. japonicum in soils prior to application of treatments at levels sufficient to support soybean growth. It is generally understood that rhizobium persist in soils when legumes have been grown in a field in the recent past thus masking any effect of applying additional inoculum. Some believe that rhizobium may not persist from one soybean rotation to the next in lighter-textured soils which are subject to summer high temperatures and dry conditions. However, the results of this three-year study in southwest Michigan did not support that supposition. Previous research conducted at MSU by Schulz and Thelen, “Soybean seed inoculant and fungicidal seed treatment effects on soybean,” showed soybean yield increased 1.3 bushel per acre on average in six of 14 site-years in fields that had been in a soybean rotation making the inoculation a cost-effective practice.

Thanks to the Michigan Soybean Committee for funding this project, TerraMax, Inc. for donating inoculant, and the collaborating farmers for their cooperation.