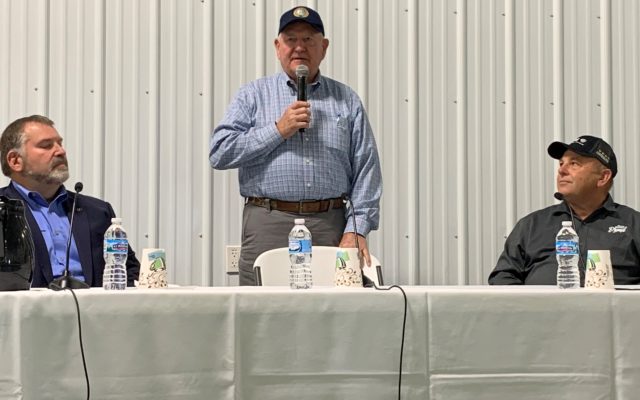 Trade was one of many topics discussed at a townhall meeting in Frankenmuth Thursday with Sec. Sonny Perdue and American Farm Bureau president Zippy Duvall.

Perdue stressed the importance of getting USMCA passed and ratified sooner than later. He said his fear is Congress getting distracted by quote other things like a political scavenger hunt” alluding to a presidential impeachment inquiry headed by Speaker Nancy Pelosi.

“I don’t even like to contemplate the fact that USMCA would not get passed—it’s an evil thought,” said Perdue. “I think Congress on both sides of the aisle will come to realize that this is a great trade agreement with our closest neighbors, and the world is watching.”

With Japan and the U.S. reaching an agreement on a trade deal, Perdue remains optimistic that this will be enough to get momentum going on an agreement with China and other countries.

“China will be watching,” he said. “I think we probably became too dependent on China as a large customer for many of our crops. Ted McKinney, our undersecretary for trade, is in Japan, Europe and the Philippines, knocking on doors saying, ‘We got product for sale and we’re open for business.’”

When it comes to his boots-on-the-ground” approach, like taking part in his first sugar beet harvest, Perdue said makes him a better advocate on behalf of U.S. farmers to President Trump.

He encourages farmers to continue to advocate for themselves and makes their wishes known.