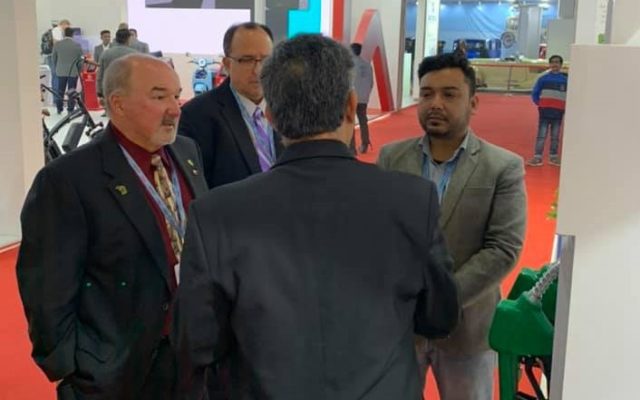 About 5.8 percent of domestically-made fuel in India has ethanol blended in it, and the entire country is pushing for a 10 percent blend.

“They’ve got a little bit of a shortfall, so we’re talking to them about importing the additional ethanol from the U.S. to get them to that inclusion of 10 percent,” said Zook.

Zook said based on the battles and headwinds the U.S. ethanol industry has faced, consumers, petroleum marketers and the auto industry in India are completely on board with ethanol being blended into the fuel stream. He said India’s perspective on ethanol was refreshing and encouraging.

“Over 600,000 attendees that were at the auto show,” said Zook. “There was a lot of positive comments and questions, and they already knew a significant amount about ethanol. That was a positive thing—we never heard one comment like we do [in the U.S.] about it’s bad for my vehicle. They understood it’s extremely important to their air quality and their vehicles run just fine on ethanol.”

In India, Zook said northern states produce their own ethanol. The Indian Oil Company, or IOCA, is making sure that whatever move they make is going to benefit the entire country. The goal is to have a positive trade balance.

“They are looking at refining the crude oil, adding the ethanol, and exporting the finished product,” he said. “It’s the value of that finished product that will help offset the cost of the imports. When they look at the studies, it’s positive for the country of India.”

USGC is working with India to get some of those studies finalized within the next 90 days.

“Once that happens, it’s up to the governmental agencies to decide if they are going to proceed forward, how they’re going to do that, or where are the rest of the shortfalls and get those addressed,” said Zook.

The U.S. is also working on a trade agreement with India, and Zook says ethanol is one of the discussion points. He added that any time the U.S. can move exports, there is a tremendous benefit for the entire ethanol industry.