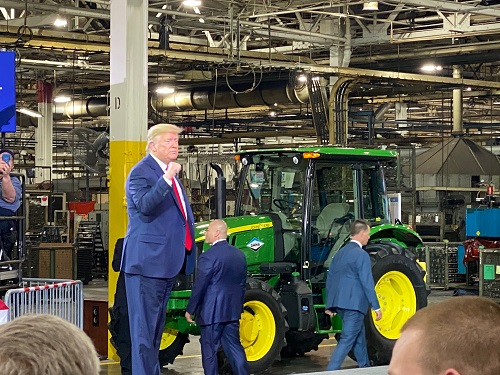 Wednesday, President Trump put his signature on USMCA, and Thursday he traveled to Michigan to speak to a crowd at Dana Inc. in Warren to tout the agreement.

He called USMCA” the fairest, most beneficial trade agreement” that has been signed into law here in the U.S.

“We just ended a nightmare known as NAFTA,” said Trump. “They took our jobs for a long time, and we now have a brand new U.S.-Mexico-Canada Agreement—it’s a whole different ballgame. It’s going to be great for this plant, it’s going to be incredible for Michigan and every place else in our country. It’s the best agreement we’ve ever made, and we have others coming.”

Jeff Sandborn, Michigan corn grower and Michigan Farm Bureau Board of Directors member, was at the rally. The USMCA updates the former NAFTA agreement, which Trump said was probably the biggest reason he decided to run for the highest office in our country. Sandborn said this agreement is good for both Michigan agriculture and manufacturing—the top two economic drivers in the state.

“Specifically [Trump] brought out about how the dairy industry should benefit because of the new deal with Canada, and the manufacturing world is definitely something that got an improvement,” said Sandborn. “Anytime we can deal with exports with agriculture, [agriculture in general] benefits.”

President Trump also talked about the Phase One trade agreement with China. Sandborn says there’s still skepticism if the Chinese will actually follow through or not. If Trump is reelected next year, Sandborn believe he will hold China’s feet to the fire.

“The Chinese will say they’re going to do it, but if they don’t have somebody to make sure they follow through, it may not happen with another administration,” said Sandborn.

That 2020 presidential election could also determine when the Chinese decide to start their ag purchases based on the Phase One Agreement.