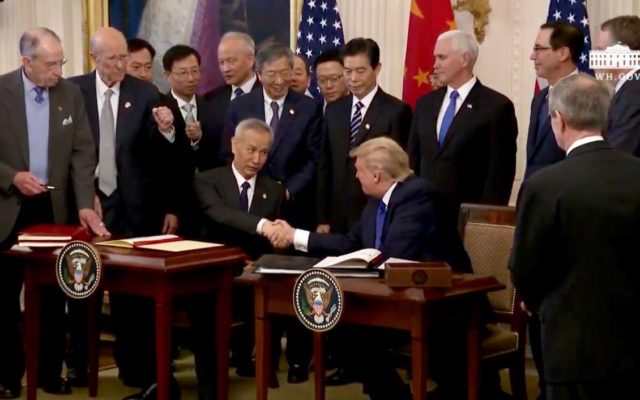 After nearly two years of Chinese retaliatory tariffs targeting U.S. agricultural exports, fears of whether a promised Phase One trade agreement between China and the U.S. would be ever be realized were laid to rest today during a formal White House signing ceremony with President Trump and China’s lead trade negotiator, Vice Premier Liu He.

Upwards of 200 guests, including Michigan Farm Bureau (MFB) President Carl Bednarski, were in attendance for the signing. In addition to Bednarski, state Farm Bureau presidents from Minnesota, Wisconsin and Ohio were all personally invited by the White House.

Bednarski, a Tuscola County cash-crop farmer, called the opportunity to attend the event and represent MFB members an honor, adding that the formal signing of a Phase One agreement is widely viewed as an essential first-step to rebuilding a struggling U.S. farm economy.

“Michigan farmers are eager to get back to business in global trade — restoring our ability to be competitive in China is definitely welcomed news,” Bednarski said, adding that Michigan farmers are ready to put the trade war and retaliatory tariffs in the rearview mirror. “We encourage the Trump administration to continue building on the success of this Phase One agreement and aggressively pursue a full trade agreement with China.”

The deal, reached in December, reportedly calls for China to buy $40 billion to $50 billion worth of U.S. agricultural products and a total of $200 billion of U.S. goods annually, over the next two years.

Those purchase requirements, Bednarski said, could be particularly good news for Michigan agriculture, known for its diversity. “China’s top five imports from the world, in order, include soybeans, followed by dairy products, fruit, beef and prepared foods,” he said.

According to Trump administration trade officials, the deal is expected to hold China accountable with a “strong enforcement mechanism,” allowing the Office of the U.S. Trade Representative (USTR) to resolve any trade disputes within 90 days and take a “proportionate response” if China is not honoring its commitments.

Rosa Wang, a Shanghai-based analyst at agricultural research firm JCI China, told the South China Morning Post on Jan. 14 that she was “quite confident” that China could meet President Trump’s demand to buy at least $80 billion of farm goods over two years.

Doing so, however, would require the Chinese government to either reduce tariffs or issue waivers to make sure private buyers join state buyers in importing American farm products, she said.

Wang forecast that China could buy $18.6 billion worth of soybeans, which dwarfs the next highest commodities, nuts and fruits, frozen pork, sorghum, distiller’s dried grains with solubles – an ethanol by-product used in animal feed – cotton, corn, wheat and poultry.

While the Phase One agreement is good news for U.S. farmers, American Farm Bureau Federation (AFBF) Economist Veronica Nigh said questions remain on how China will meet agricultural purchase obligations called for under the newly inked agreement.

“Given the fact that the record for U.S. ag exports to China was about $26 billion back in 2012, this large $40 billion to $50 billion figure has caused many to wonder where that additional 14 to 24 billion dollars in U.S. ag products would come from each year,” Nigh said.

According to Lighthizer, the agreement also establishes a strong dispute resolution system that ensures prompt and effective implementation and enforcement with the U.S. agreeing to modify its Section-301 tariff actions.

President Trump has indicated Phase 2 negotiations of the agreement will begin soon.