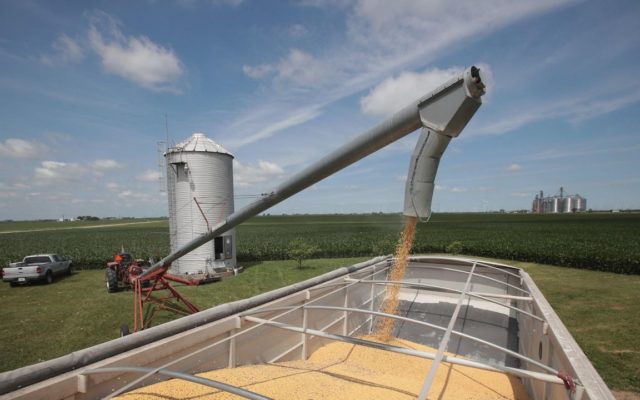 WHEAT: The outlook for 2019/20 U.S. wheat is for stable supplies, increased exports, and decreased ending stocks. The only supply or use category that was changed this month was a 25 million bushel increase in exports reflecting growing competitiveness in international markets. Ending stocks are cut by a corresponding amount and are now forecast to total 940 million bushels, a five-year low. Global wheat supplies are lowered fractionally on small and mostly offsetting changes to beginning stocks and production. World exports are increased 1.8 million tons led by a 1.0- million-ton increase for the EU on strong shipments and more competitive prices. Kazakhstan is raised 0.8 million tons, also on a fast export pace. United States is increased 0.7 million tons and is projected to have the largest exports in three years. Partly offsetting are export reductions of 0.5 million tons for Canada and 0.3 million tons for Pakistan. World imports for 2019/20 are raised 1.9 million tons led by a 0.8-million-ton increase for China and a 0.7-million-ton increase for Turkey, both on a strong pace to date. There are also several historical revisions for trade, consumption, and ending stocks reflecting updated export data, particularly for Pakistan. For the 2019/20 market year, global consumption and ending stocks are lowered fractionally though world ending stocks remain record large.

COARSE GRAINS: This month’s 2019/20 U.S. corn outlook is little changed relative to last month, with offsetting changes to exports and corn used for ethanol. Exports are lowered 50 million bushels, reflecting the slow pace of shipments through January. Offsetting is a 50 million bushel increase in corn used for ethanol, based on Grain Crushings and Co-Products Production data through December and the robust pace of weekly ethanol production data as reported by the Energy Information Administration during the month of January. With no other use changes, U.S. corn ending stocks are unchanged from last month. The seasonaverage corn price received by producers is also unchanged at $3.85 per bushel. Global coarse grain production for 2019/20 is projected 0.9 million tons higher to 1,402.7 million. This month’s foreign coarse grain outlook is for larger production and consumption, and lower stocks relative to last month. Global corn production is raised 0.8 million tons, with increases for South Africa, Moldova, and Ukraine more than offsetting a reduction for Vietnam. For South Africa, production is higher as timely rainfall during the month of January improves yield prospects. Major global trade changes for 2019/20 include higher projected corn exports for South Africa, Ukraine, and the EU, with a largely offsetting reduction for the United States. Corn imports are raised for Turkey and Brazil, with the latter reflecting larger-than-expected shipments to livestock production areas in the southern part of the country. Foreign corn ending stocks are down from last month, mostly reflecting reductions for Vietnam, Brazil, WASDE-597-2 Paraguay, and the EU. Global corn ending stocks, at 296.8 million tons, are down 1.0 million from last month.

OILSEEDS: This month’s 2019/20 U.S. soybean outlook is for increased exports and lower ending stocks. Soybean exports for 2019/20 are projected at 1.825 billion bushels, up 50 million from last month partly reflecting increased imports for China. With soybean crush unchanged, soybean ending stocks are reduced 50 million bushels to 425 million. The U.S. season-average soybean price for 2019/20 is forecast at $8.75 per bushel, down 25 cents reflecting reported prices to date. The soybean oil price forecast is lowered 0.5 cents to 33.5 cents per pound. The soybean meal price forecast is unchanged at $305.00 per short ton. This month’s 2019/20 global oilseed outlook includes higher production, trade, and stocks relative to last month. Global oilseed production is raised 2.2 million tons to 576.8 million, with higher soybean, sunflowerseed, and cottonseed production. Partly offsetting is lower palm kernel production. Soybean production for Brazil is increased 2 million tons to 125 million due to favorable weather in Mato Grosso as well as improved rainfall in southern and northeastern soybean areas. Sunflowerseed production is increased for Ukraine on a higher yield. Palm kernel and palm oil production are reduced for Malaysia and Indonesia on current production to date and dry weather conditions throughout the past year. Global 2019/20 oilseed exports are raised mainly on a 2.4-million-ton increase to soybean trade. China’s soybean imports are increased 3 million tons to 88 million reflecting higher soybean crush. Correspondingly, soybean exports are increased for the United States, Brazil, and Ukraine. Global soybean ending stocks are 2.2 million tons higher than last month, with higher stocks for China and Brazil.

SUGAR: Mexico sugar production for 2019/20 is projected at 5.672 million metric tons (MT), a reduction of 99,994 from last month. This forecast matches the survey-based estimate made by CONADESUCA on February 5. Imports and domestic deliveries are unchanged. Ending stocks are increased slightly to reflect 2.5 months of forecast domestic sugar use WASDE-597-3 before the start of the 2020/21 sugarcane harvest. These changes of 101,388 MT flow through to a reduction of forecast exports. Exports outside of those shipments under license to the United States are reduced to 32,951 MT, an amount estimated by CONADESUCA that is equal to exports through January 26. Exports to the United States are reduced by 94,296 MT to 1.469 million. Total U.S. supply for 2019/20 is reduced by 33,694 short tons, raw value (STRV) on lower forecast imports. Imports from Mexico are reduced 110,180 STRV to 1.717 million. TRQ imports are increased by 70,486 STRV to 1.674 million. This increase reflects the USTR reallocation of unused country-specific quota allocations for the fiscal year 2019/20 WTO raw sugar TRQ announced on February 6. The resulting raw sugar WTO shortfall is projected at 40,000 STRV. There are no changes to use. Ending stocks are projected at 1.516 million STRV, implying an ending stocks-to-use ratio of 12.36 percent, down from 12.69 percent last month.

COTTON: The U.S. cotton estimates for 2019/20 are unchanged, except for a 1 cent-perpound reduction in the season-average upland farm price, to 62 cents, 8.3 cents lower than in 2018/19. The 2019/20 world cotton forecasts include a 2.5-million-bale increase in ending stocks, driven by both larger production and lower consumption. A 1-million-bale decline in China’s expected consumption is the largest single change this month: consumption is lower despite the positive impact of the U.S.-China trade agreement, due in part to the negative economic effects of the novel coronavirus outbreak. Consumption is also projected lower in Vietnam but higher in Pakistan and Turkey. Production in Brazil in 2018/19 is revised upward by 480,000 bales reflecting higher production in Mato Grosso. Pakistan, Brazil, and Tanzania production in 2019/20 is revised upward. Total production changes this month come to a 1.3- million-bale global increase, while total consumption changes net to a 1.2-million-bale reduction.