Developing a Plan To Manage Black Tar Spot This Winter 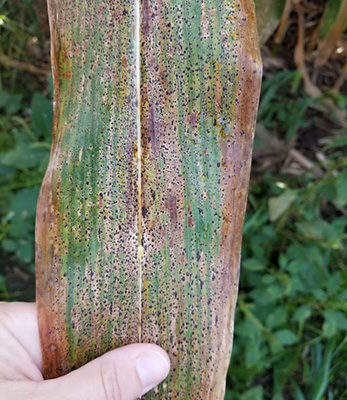 Black tar spot has slowly been making its way through Michigan since it first appeared in a corn field in Allegan County in 2016.

In 2019, the disease was found in more than 35 counties in southern Michigan and into the Thumb.

Dr. Martin Chilvers, field crops pathologist with MSU, says most of the severe cases are in the southern part of the state.

“In terms of severity, disease is going to be a really big issue on the west side of the state, maybe Central,” he said. “Because the amount of inoculum is not as high in the Thumb region, I don’t expect huge losses that way, but people should definitely keep an eye on that.”

While it was wetter earlier in 2019, there wasn’t as severe of cases of tar spot in Michigan fields as there was in 2018.

“Comparing 2018 to 2019, we had pretty regular rainfall throughout the season, so we had pretty significant losses in some fields—up to 50 bushels,” said Chilvers. “2019 was pretty dry from mid-July to August, and that slowed the amount of tar spot that was developing. In general, some guys were losing about 20 bushels to the acre.”

Chilvers says compared to 2018, the biggest story for tar spot was lodging.

“We might not have lost as much yield, but there was a lot of corn on the ground due to tar spot—it effects the stalk integrity,” he said.

When the crop is in the field, there are fungicides you can apply at the appropriate time to hinder the severity of the disease. Tillage isn’t a silver bullet to remove tar spot either.

In the off season, Chilvers suggests to talk to your seed dealer to choose hybrids to identify varieties with the best resistance or tolerance to tar spot.

“That’s number one for managing any disease,” he said. “After that, being aware of your situation and where you are in the state. If you’re on the West side, you’re at much higher risk than the Thumb at this point. Then during the season, scouting and being aware of what’s going on in the neighborhood [is important.]”

Chilvers also wants to growers to educate themselves about the importance of how leaf moisture can drive diseases, such as black tar spot, since irrigation can increase the likelihood of developing tar spot.