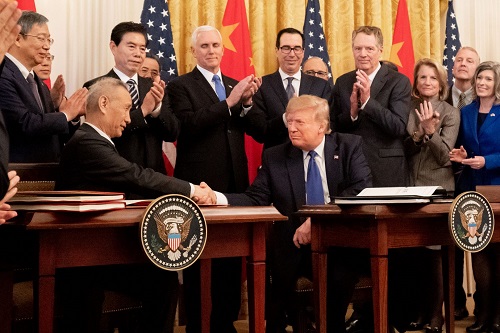 President Trump and Chinese Vice Premier Liu He have signed the Phase One trade agreement in the East Room of the White House Wednesday afternoon. This is the first step toward progress to end the nearly two-year trade war.

According to the USDA, the Agriculture Chapter addresses structural barriers to trade and will support a dramatic expansion of U.S. food, ag and seafood product exports, which will increase American farm and fishery income, generating more rural economic activity and promoting job growth.

Several ag organizations have expressed their gratitude and appreciation that this is moving the trade war forward.

Michigan Farm Bureau President Carl Bednarski was at the signing.

“China’s top five imports from the world, in order, include soybeans, followed by dairy products, fruit, beef and prepared foods,” he said.

In a release, USDA Secretary Sonny Perdue said quote “This agreement is proof President Trump’s negotiating strategy is working. While it took China a long time to realize President Trump was serious, this China Phase I deal is a huge success for the entire economy. This agreement finally levels the playing field for U.S. agriculture and will be a bonanza for America’s farmers, ranchers and producers.”

The dairy industry also is applauding these achievements. Former USDA Secretary and current president and CEO of the U.S. Dairy Export Council said this announcement makes progress on regulatory restrictions and other nontariff barriers hindering dairy trade is a positive step forward. These are important deliverables that USDEC has been pressing China for over the course of the last few years.”

Kevin Ross, president of the National Corn Growers Association, issued the following: “Signing the phase one agreement with China is a step in the right direction to resolving the trade dispute with China and restoring the trading relationship between our two countries. China holds tremendous opportunity for American corn, ethanol and DDGs and NCGA looks forward to learning further details of what phase one will mean for these products.”